Happy New Year! I know I’m late to the party, but it’s better to arrive late than not at all. Especially when it comes to resolutions and setting a new #oneword for 2012.

Last year, I chose the word “spirit” and the resolution was described as: “I need to find ways to nurture my spirit and keep it alive. If it is buried, tarnished and bruised then I am not my best self for those around me. Spirit is the place from where I draw my courage, passion and agency to impact the world.” The last year I spent time internally focused and finding new ways to nurture the fire inside.

I actually started to think about what my #oneword in 2012 should be in December. It was first inspired by this post @kellystier made:

Then, in conversation with a dear friend, we identified that in Chinese astrology 2012 is also the year of the Dragon. Since the Dragon is our animal, it is our year! The Year of the Dragon has been described as, “Dragon years are favorable for the enterprising and ambitious. If you want to succeed at something major, start early in the Dragon year. Don’t give up. Express yourself openly. Show no fear. In China, it is said that the Dragon year brings luck to those who dare to speak out, to take charge and even to take over.” (link to Astrology.com)

The word “fearless” resonated even more. It was time. I had renewed my spirit. I was ready…to be fearless. To fear less. To have less fear. 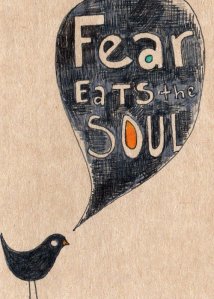 1) Owning my truth, speaking my truth and advocating for myself. Sometimes I am guilty of not speaking up, putting an idea out on the table, or standing up for myself. I am a smart woman, with gifts to share where respected. I will remove myself from environments that do not nurture my spirit. I control this moment.

2) Embrace my beauty. Believe in myself. Swallow my fears. Push myself to the limit. Be open to the possibilities and the power I hold within. I’m going to make a splash!

3) With fearless abandonment, I will attack and complete my dissertation in 2012.

What’s something fearless you have done in your life? What tips can you share on living life boldly?

I'm Amber, the smiling voice behind the musings you see here.